The Town Council is elected every four years with the last elections being in May 2019. The Chairman of the Council is elected annually each May by fellow councillors. As well as the usual Chairman’s duties, the elected person also serves as Town Mayor. The Mayor’s Chain of Office carries a pendant illustrated with a rebus of the town’s name.

The origins of the rebus are not certain but the picture of a hare leaping over a barrel certainly dates from the 19th century. An old Norfolk term for a hare is a “Watt”, and a more ancient name for barrel is a “Tun”, hence Wat – ton! The rebus is also shown in the lower part of the Watton Town Sign, located in the High Street, which depicts the local ‘Babes In The Wood’ fable.
Watton Town Council operates a monthly meeting structure of two Full Council meetings, one on the second Tuesday of the month and the other on the fourth (all months apart from December when only one meeting is held). Meetings usually commence at 7pm and are held at Wayland Hall.

All Council meetings are open to the public. Public Participation is on every agenda. During the fifteen minute window of public participation members of the public have an opportunity to address the Council.

Watton Town Council is the owner-occupier of Wayland Hall which is situated in Middle Street just off the north side of the High Street.

The Town Council Office is open between 9am and 1pm Monday to Friday. 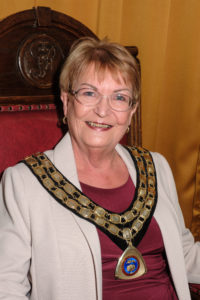